Talk about a good law in your country ielts fever. This is the 63rd cue card in the series of ielts speaking test. You should try to speak this cue card for 2 minutes or above.

Law which is good in  your country Cue card ( Sample-1)

In recent years the government of our country has passed a lot of commendable laws in favour of citizens of our nation. Although I like most of them here I would like to speak about a law called woman protection law. Which was brought into force by the Indian government. One of my friends is a lawyer and it's he who told me about this act. This law was enacted over a decade ago in order to protect married women from domestic violence. Furthermore, This law needed to be passed because the majority of females in my country were being subjected to physical or verbal abuse by their in-laws.
Also read this- Describe a time when you had some medicine
This law encouraged women to approach the police and stand against any kind of verbal, emotional or physical abuse by any of their in-laws. The judge can order many different measures under this law. In order to ensure a female's protection and well-being. This includes ordering the offender to stop violence, monetary relief, custody orders and composition orders. Different people view this law from different viewpoints whereas some have criticized the law as having too little force, many have spotted it as it has settled many in-laws from abusing their daughters-in-law. A little portion of people has opposed the law arguing that it might be misused by women during disputes.

Ending lines- Describe a good law in your country

Also read this Describe a Poisonous Plant in your country
Nevertheless, I view this as one of the greatest acts of this century for several reasons. Firstly after its passage, the rate of violence against females declined to a great extent. Then, it has empowered women. Earlier of women had to face and almost difficulties after marriage in her in-laws family and she had to keep quiet despite being a victim because she was helpless. But today because of the law she has the power to fight against those problems. All in all, I would say that this law was in need of the hour and this is the best law that I like in my country.

Talk about an important law in your country (Sample-2) 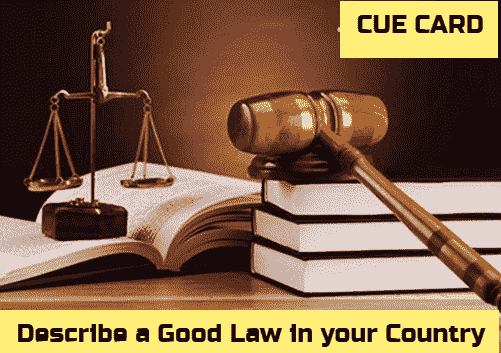 In my notion, laws are made to run the things smoothly in the general interest of common people. However I am not very well aware of all laws but still, there is a law that in my knowledge is very effective. Here I would like to describe the law that states, an individual only getting 18 years old can drive a vehicle on Indian roads. Since I have passed my senior secondary and turned 18 as well. I'm having a driving license and find this policy really crucial to avoid Road mishaps that could be caused by the driving of minors on roads.
Also read this- Cue card on Dream House or Perfect Home
Because the law strictly allows the people to drive the vehicle on once they are mentally and physically capable of handling situations while travelling. While listing out the advantages of this law I can say it restricts the vehicles on road, it avoids unnecessary Road hassles just because youngsters under 18 take vehicles and come on the road. And finally due to this law after qualifying a written and practical driving test one gets the legitimate right to come on the road with a vehicle.

In my view laws are incredibly important in creating an environment where people can safely live and expect to be on the track of social progress. All in all, laws are essential to make the things under control and socially productive. I find this law of getting issued the driving license at age of 18 is the most socially relevant law. So I believe every minor must obey this and try to contribute in successfully implementing this law.